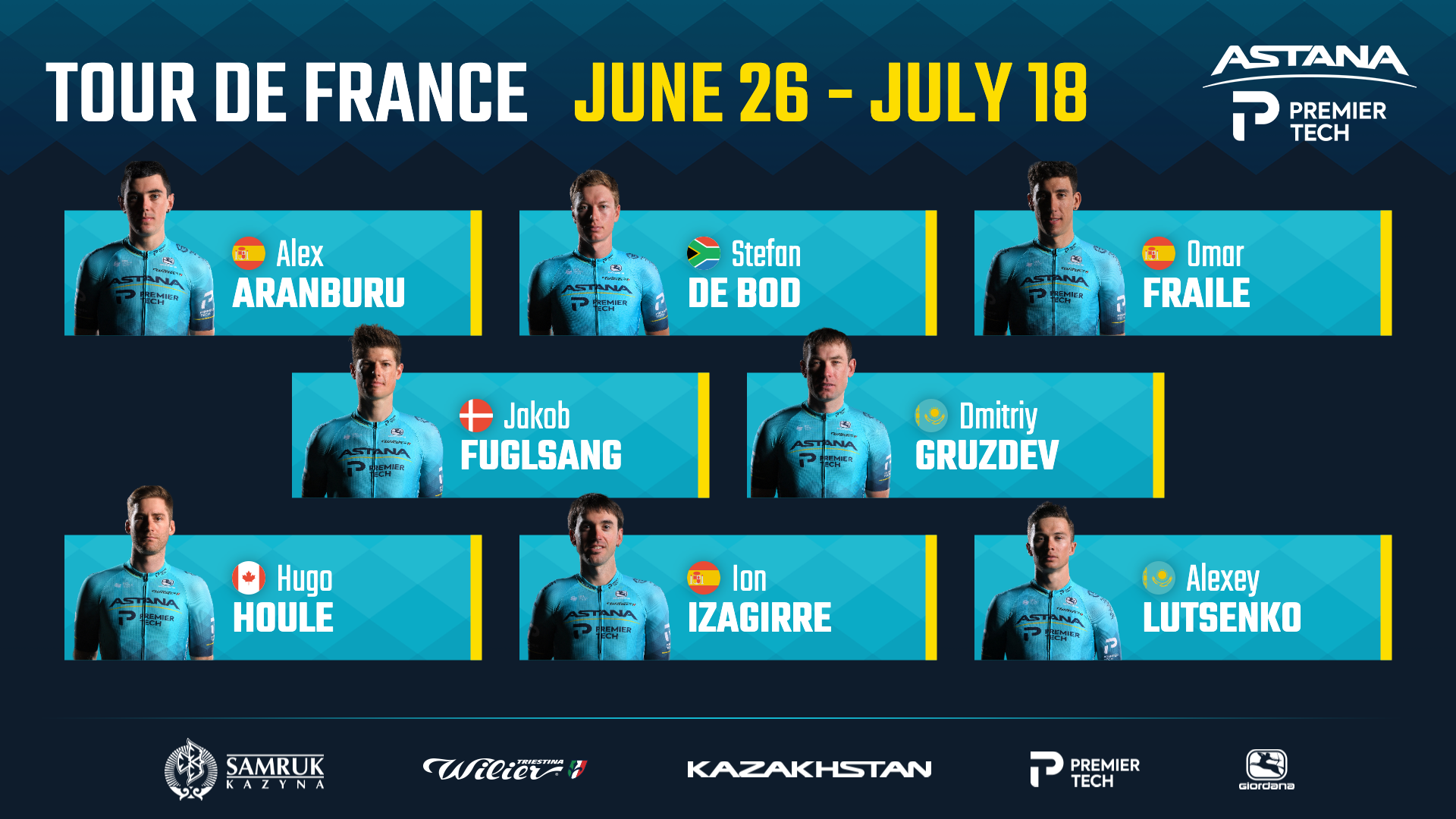 Astana – Premier Tech is set to hunt for stage wins at the Tour de France when the 108th edition gets underway in Brest this Saturday, June 26.

“Our main focus at this year’s Tour de France is stage wins. We are coming to France with a strong and motivated team featuring Tour de France stage winners Alexey Lutsenko, Ion Izagirre, and Omar Fraile, our new Spanish Road Race champion. We have two-time Monument winner Jakob Fuglsang, and Basque Country stage winner Alex Aranburu, who is set to make his Tour de France debut alongside South African Stefan de Bod. Last, but not least, our breakaway riders Hugo Houle, who showed his strength at this year´s Ronde van Vlaanderen, and Dmitriy Gruzdev, complete our line up,” said Fofonov.

“We have a versatile roster and will make the most of the freedom that comes with stage hunting. Winning a stage at any Grand Tour, let along the Tour de France, isn’t easy but I am confident that we will enjoy success, as we did last year, and show the Astana – Premier Tech jersey at the front of the race.”

The team’s focus will switch from the General Classification to hunting for stage wins for the upcoming 21 stages, with an emphasis on the mountain stages and punchy terrain, as well as the two time trials following Lutsenko and new Spanish Time Trial champion Izagirre’s success at the Criterium du Dauphine.

Stefan De Bod – South Africa
“I am grateful for the opportunity to make my debut at the Tour de France together with a strong and experienced squad and I will give my best to pay back their confidence in me. I am excited to chase our team’s goals of winning stages. We had a good week of racing at the Tour de Suisse, where I felt already in good shape. This race is the dream of every cyclist and I will enjoy every day of racing, even if there will be some hard moments.”

Omar Fraile – Spain
“I am looking forward to racing at the Tour de France, especially after yesterday. My last professional win was at the Tour de France back in 2018, so the win at the road race yesterday is something really special and gives me an extra motivation ahead of the Tour and a lot of confidence. Of course, winning a Tour de France stage in this jersey now would be the cherry on top but we will see. I feel good and I am in a good shape, so I will take every opportunity to achieve a top result.”

Jakob Fuglsang – Denmark
“I feel really good but I will use the Tour de France more for fine-tuning, to be 100% ready for the Olympics so I am not focusing on the overall. But I will take it day by day because every day is important, especially in a Grand Tour, where the easiest days can turn out to be the most damaging days in terms of losing or winning the race. Every day is unpredictable. Some days I will go deep trying to win a stage and other days, like the sprint stages, I will take easy not fighting at the front all day long to save energy and build up for Tokyo.”

Dmitriy Gruzdev – Kazakhstan
“I am looking forward to another Tour de France with the team. I’m feeling good and have had a good training block since the Criterium du Dauphine so I’m ready to race. I want to be as useful as possible for the team and help us achieve our goal of winning stages. I think we have a great team and will have many opportunities to show what we can.”

Hugo Houle – Canada
“I am really happy and proud again be part of the Astana – Premier Tech team for the Tour de France. It is not easy to get selected for the biggest tour of the year, so for me it is really great to be there again. This year, I will have more freedom to go on the attack as we are not targeting the General Classification. My goal would be to win a stage in this year´s Tour de France, in honor of my brother. My form is going in the right direction towards the Tour and I am looking forward lining up in Brest, trying to be part in some of the breakaways and hopefully, finishing it off with a stage win.”

Ion Izagirre – Spain
“After last year´s crash and the abrupt end to my Tour de France journey, I feel I have unfinished business and I am especially looking forward to racing the time trial stages. I think we have a strong team and we already showed good form at the recent stage races and again, yesterday at the Spanish road race. This year we don’t have specific General Classification ambitions, which gives us all the chance to battle for stage wins. It would be great to add another stage win after winning my first Grand Tour stage back in 2016.”

Alexey Lutsenko – Kazakhstan
“I only have good memories from last year´s edition. Winning a stage at the Tour de France had been always a dream which I wanted to achieve. Returning to France having a stage win sticker on my race number makes me really proud. It would be great to repeat it this year. I feel good and, especially after the stage win at the Criterium du Dauphine, I am confident that I am able to compete for the another stage win. I want to reach the peak of my shape towards the Olympic Games after the Tour de France.”