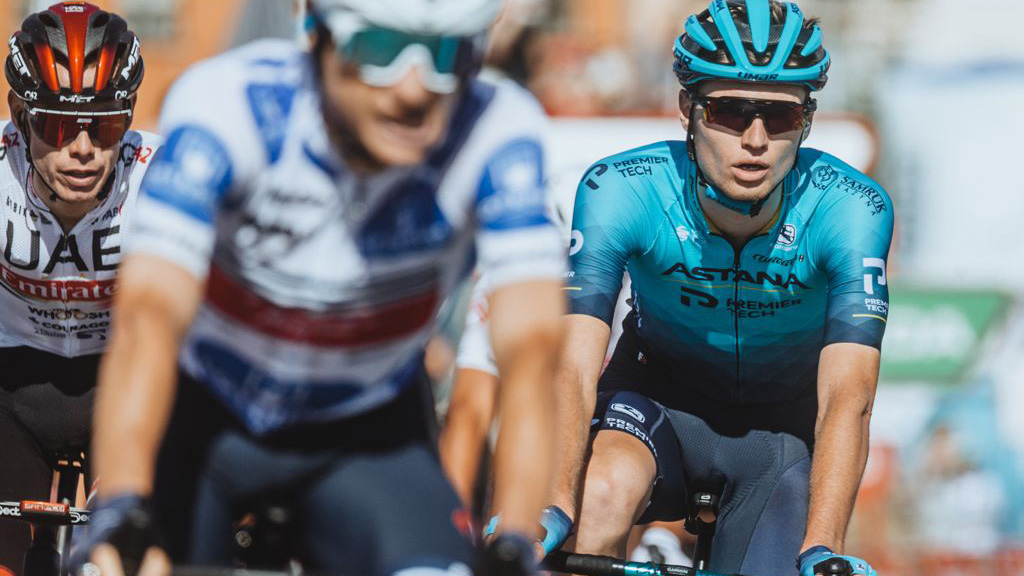 Astana – Premier Tech leader Aleksandr Vlasov showed a brave and solid race on the sixth stage of La Vuelta with the finish atop the two-kilometer-long steep climb Alto de la Montaña de Cullera. Vlasov was part of the leading group of GC contenders, firstly moving in front inside the final kilometer of a super steep and explosive climb and later making a strong attack to try and catch the only remaining rider from the early breakaway and to win this stage. However, Magnus Cort, a rider from the break was able to hold on and take the victory, while Primoz Roglic and Andrea Bagioli both were able to close the gap, opened by Vlasov, and to pass him right before the finish line. Thus, Aleksandr finished fourth today and thanks to this result, he moved up to sixth position in the General Classification.

“Today I felt quite good and in general I think my form is getting better day by day. The stage was a really hard one, very fast and also the wind in the final made it even harder. But my teammates did a great job to bring me to the front group after the peloton split in parts and later, I got some important help while we were heading into the final climb. I was in a good position and I just tried to follow the first riders. Inside the final kilometer I tried to attack by myself and I think it was a good move, but at the end we couldn’t catch the last rider from the break and I finished fourth. However, I am quite happy with this day and my form. Let’s see what will happen in the next stages”, – said Aleksandr Vlasov.

Stage 6 was characterized by hot weather and strong crosswinds in the final part of the stage, which impacted the race a lot, creating echelons on the final circuit in Cullera. The stage also saw many crashes with Oscar Rodriguez and Yuriy Natarov both involved in them. After a big battle at the start, five riders finally went away in the daily breakaway. Heading onto the final climb, the riders from the break still had a one-minute gap, but only Magnus Cort was able to survive and to keep his minimal advantage until the finish line.

Astana – Premier Tech worked really well all together today and the riders brought Aleksandr Vlasov and Alex Aranburu into a good position before the final climb. Alto de Cullera was a tough challenge for Aranburu, while Vlasov did an impressive ride all the way to the top, showing his improving form.

“The team did a great job today for Aleksandr and on the final climb he showed himself really well. It was a difficult stage for us, some riders were still suffering from yesterday’s crash, and also today we had Oscar Rodriguez and Yuriy Natarov both involved in a new crash. Fortunately they both finished the stage. There was a difficult moment in the crosswinds, but the team did everything in the best possible way, closing the gap and bringing Vlasov to the front. Well, we were aiming for a stage win today and Aleksandr was really close to it, but anyway he did a super race and it is a solid fourth place for him”, – said Dmitriy Fofonov, Team Performance Manager.