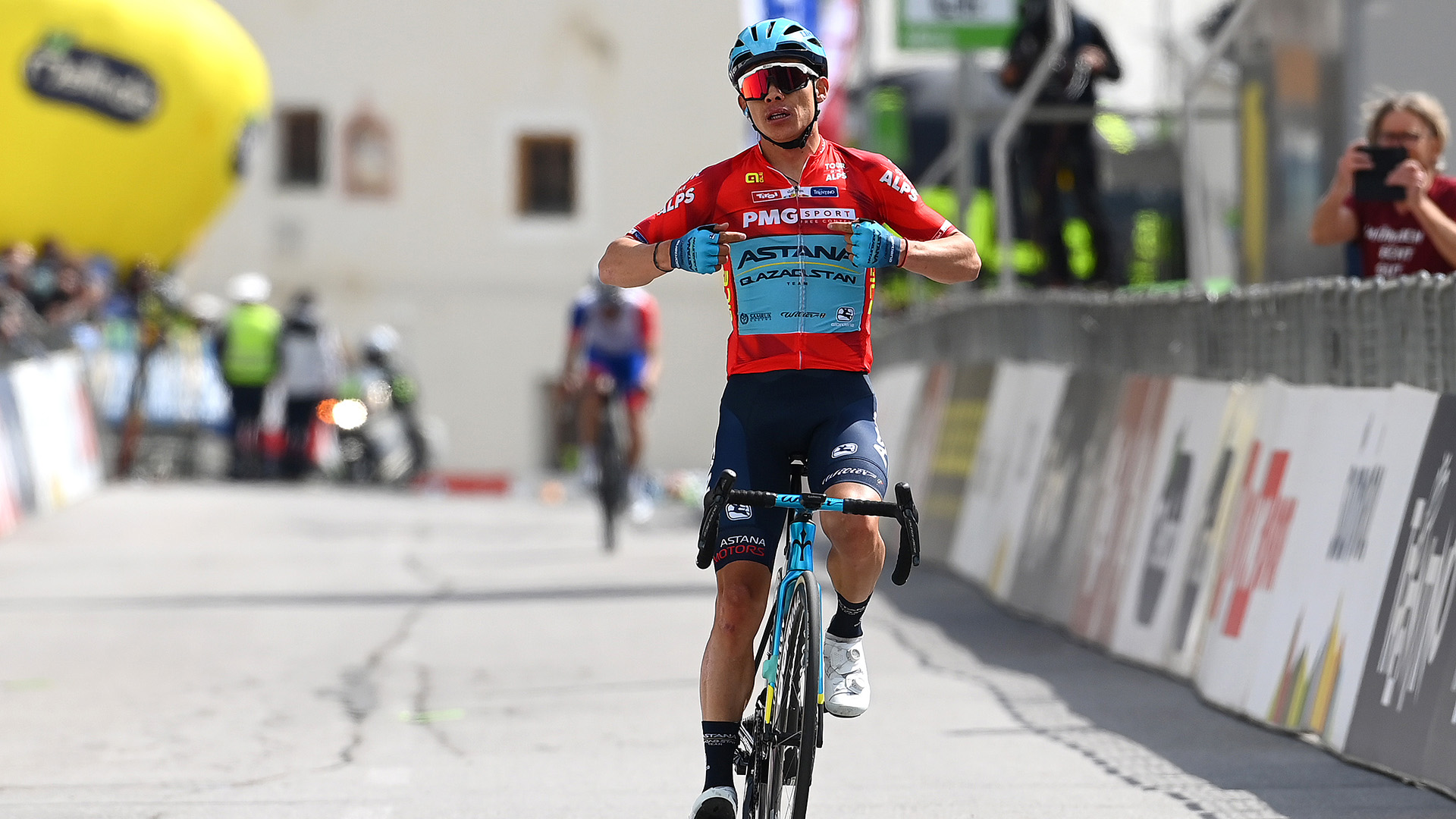 Tour of the Alps. Miguel Angel Lopez wins atop Grossglockner

The leader of Astana Qazaqstan Team Miguel Angel Lopez takes a beautiful solo win atop Kals am Grossglockner at Stage 4 of the Tour of the Alps. Lopez attacked from the peloton with some four kilometers to go; firstly, he caught the only remained rider from the earlier breakaway Thibault Pinot and later after a counterattack he went solo to take his first win of the season.

“It is a good day for me, but also for the whole team. We were looking for this success and now we get the confidence and motivation for the next goals. It was the only stage with an uphill final and, definitely, I was motivated to try something today. I stayed calmly in the main group while we had Sebastian and Fabio in the break, but when it became clear that it won’t reach the finish, I decided to attack. I made a powerful move, shortly getting a gap to the peloton. But until a moment I still was not sure if I can reach Thibault Pinot or not. He still was far away in front, but with some 2.5 kilometers to go I finally saw him in front, and in that moment I just gave my best to catch him and later to attack again”, – said Miguel Angel Lopez.

“I lived some good moments at the finish, and I wanted to deliver this success to Astana Qazaqstan Team, my home team where I returned this season and where I got a very warm welcome back. Also, I wanted to dedicate the win to my second child, who we are expecting with my wife soon. Alongside this by this victory I just wanted to remember our great champion Michele Scarponi who left us five years ago”, – continued Miguel Angel.

“Well, we arrived here with a goal to make the final step in our preparation to the Giro d’Italia, to feel the racing rhythm, to try different tactics and to try to win a stage. I believe we are spending a good week here at the Tour of the Alps, I feel like my form is growing and I am on the right way to the Giro”, – concluded Lopez.

Astana Qazaqstan Team was very active from the start: firstly, it was David De La Cruz who attacked for several times for a breakaway, and in a moment he found himself in a group of eleven riders. When this group has been caught back, Fabio Felline and Sebastian Henao made another move, which brought them to another group of escapers.

After a crash Fabio Felline came back to the peloton, where he provided some help to Miguel Angel Lopez, while Sebastian Henao still was fighting for a stage win until the final six kilometers, when the peloton neutralized his breakaway.

There was still a rider in front of the race – Thibault Pinot, but he could not resist under a super strong attack of Miguel Angel Lopez, who won today’s Stage 4.

“We had two options for this stage and at the meeting before start we decided that it is better if Miguel Angel stays in the peloton for the final, while some other riders would try to do something in the break. I think our team did a great stage with David De La Cruz and later with Fabio Felline and Sebastian Henao, who worked hard and fought for a stage win. Well, at the end of the day it did not work, but we still had our leader Miguel Angel Lopez, who was ready to attack on the final climb. It was a perfect move; he was unstoppable today. We all are really happy with this long-awaited victory, and it brings us some good motivation and inspiration ahead of the Giro d’Italia”, – said Alexandr Shefer, Sports Director of Astana Qazaqstan Team.